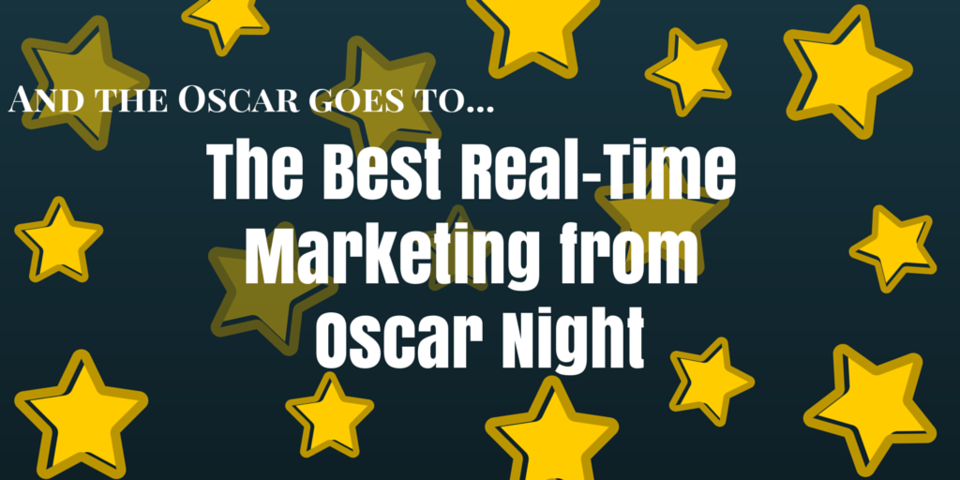 Putting the overall tepid reviews of Oscar night and its host aside, the general mood on Oscar night was one of inspiration and motivation. The winners and their speeches were uplifting, and used their podium to not only thank but to inspire. The social conversation shared a similar tone.

If you're still not convinced, the top social moment of the night, receiving 60K mentions on Twitter and 214K mentions on Facebook, was Lady Gaga's "Sound of Music" tribute, after which Julie Andrews joined her on stage. Although the reactions were mixed, the majority felt you couldn't get any more "feel good" than that.

That same Facebook to Twitter ratio was fairly representative of the social landscape on Sunday night, with Facebook dominating the Oscar conversation. But while the TV viewing audience took a major hit this year (down more than 7 million from last year), Twitter's audience shrunk only slightly (now at 13 million, compared to last year's 13.9 million), and Facebook's grew significantly (now at 21 million, compared to last year's 11.3 million). It's clear that if you're looking to connect with the Oscar audience, online is where to do it.

There are 24 categories awarded for excellence on Oscar night, but those few who took home the trophies were not the only winners this past Sunday. Brands, causes, and otherwise snubbed franchises made the most of a smaller, but still enthusiastic online audience, providing us all with some excellent takeaway lessons for this, the final part of our four-part series on real-time marketing:

Don't Be Afraid to Rewrite the Script

The conversation went beyond movies on Sunday night, with #AskHerMore — a campaign from The Representation Project and Amy Poehler's Smart Girls — which called on red carpet reporters to ask actresses about more than fashion. The results, documented in this video by Upworthy, are nothing short of inspiring.

By the conclusion of red carpet coverage, more than 27,000 tweets had been sent using the hashtag.

#AskHerMore wasn't the only effort looking to change the conversation around beauty Sunday night. Following suit, Dove, which has long been known for its self esteem boosting efforts among women, along with Twitter launched the #SpeakBeautiful campaign:

The power is in your hands.

Join us & @Twitter to #SpeakBeautiful and help change the beauty conversation. pic.twitter.com/ABb74R3jcq

We need to set a new bar.

We & @Twitter need one more partner: YOU! #SpeakBeautiful pic.twitter.com/rENJFZxC06

The campaign hopes to encourage women to change their attitudes and the way we, the general public, talk about beauty online. As a part of the effort, Dove is also responding to negative tweets, and while critics of the campaign have called it an overstep, its being well received for the most part.

For many brands, a chance to join these uplifting conversations was missed. These missed opportunities serve as a reminder to be aware of all of the conversations, and be ready to join them, or risk being left out in the rain, as was the case for this red carpet real-time attempt by Barneys New York that seemed to fall flat:

Not only did the post fail to take advantage of any event hashtags #Oscars or #Oscars2015, it missed the spirit of change that #AskHerMore, #SpeakBeautiful, and most of the red carpet coverage embraced.

Sometimes You Have to Build Your Own Spotlight

The social strength of the "The Lego Movie" and its creative team was made absolutely clear mere moments after they were not nominated for Best Animated Feature:

It's okay. Made my own! pic.twitter.com/kgyu1GRHGR

And Sunday night, they carried that momentum right into the Oscars themselves, with some strong backup on social:

In total, Lego's Oscar night shares enjoyed more than 55 thousand engagements. And I think we were all a little bit Oprah when the Lego Oscars started being distributed.

Lego's award-winning performance on social, serves as a reminder to us all: Sometimes you have to work with what you're given and really believe "Everything is Awesome!"

Don't Let Them Play You Off

Sunday night not only saw some of the best in film, it was a masterclass in how to talk through the orchestra playing you off. They had something to say, and gosh darn it, they were going to say it. On social media, brands were following a similar philosophy, not letting their exclusion from the film industry or B2C conversation, keep them out of the party.

This well-timed tweet from the Labor Department (not technically a brand, but still a real-time winner on Oscar night) took great advantage of the conversation started by Patricia Arquette's acceptance speech:

Farmers Insurance was on top of its game too when spokesman J.K. Simmons took home the award for supporting actor, and even had some fun with Oscars host Neil Patrick Harris:

It's Oscar gold for #JKSimmons! Congrats on snagging Best Supporting Actor for an amazing performance in Whiplash. #BumBuDumBumBumBumBum

.@ActuallyNPH You can sing our jingle anytime! #BumBuDumBumBumBumBum #Oscar2015

Truth is, this won't always garner the kind of results the Labor Department and Farmers Insurance saw, but as you can see from the level of engagement, active listening paid off for these real-time efforts.

And with that, this real-time marketing season officially enters the history books, but that doesn't mean you can leave these lessons behind. This year's Super Bowl, Grammy Awards, and Oscars, have given us plenty of reminders of how staying active and aware on social can lead to huge opportunities for building brand awareness and engagement with your target audience. Take these lessons into your everyday social, and always be ready for those big moments.