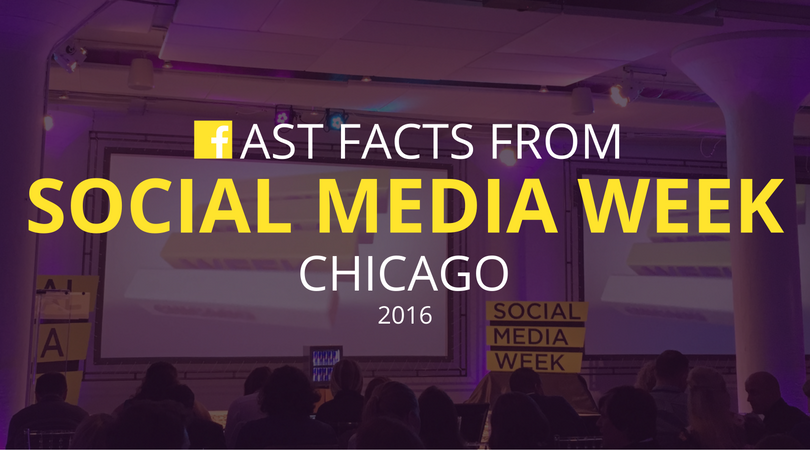 Target audiences, platforms, keywords, hashtags, influencers, analytics, engagement, impressions, scheduling, paid, we’re already out of breath and we haven’t even mentioned the event that brings all of these terms to one main stage: Social Media Week.

Social Media Week is the ultimate setting for anyone who prefers to write in 140 characters or less. While there was a bevy of topics covered, stats tossed to the audience, and brand examples to last us a lifetime (ok... only until SMW 2017), we’re keeping things short and sweet.  Ding, ding! Tier One’s lightning round of fast facts from SMW Chicago 2016 begins now:

Without engagement, the average Tweet has a lifespan of only 18 minutes

Don’t be dazzled by vanity metrics. Engagement (likes, comments, shares, etc.) is where it’s at. Help your tweet live its life to the fullest by creating content with that in mind. Don’t just promote, spark conversation to encourage engagement with your brand for the lasting (and maximum) effects of your tweet. #YOLO.

For every hour spent creating content, you should spend 9 hours promoting. Is your mind blown? It’s crazy, but true. Here’s a Tier One tip: create a handful of social posts and images all around the same topic when you initially create content. That way, you’ll have plenty of promotional material on hand whenever you need it.

If the average adult spends 20 hours online each week, that’s approximately 12,480 minutes on Facebook and Instagram a year (yes, we did the math). If that doesn’t convince you of the importance and value of a strong social presence, we don’t know what will. Make those minutes count!

Paying to play on social media isn’t going anywhere. As many brands now build campaigns entirely around paid social media opportunities, tossing it in as an afterthought is too late. Still hesitant? Try small-scale paid promos on the platform with your strongest ideal demographic before going bigger. Keep in mind the buzz from SMW was that if you want to get the best results, you might have to go big or go home with spending... but this stat alone proves it’s a worthy investment.

Get to the heart of the matter in the first 1.5 seconds of video

Remember in middle school when you learned an intro paragraph of your essay needs a “hook” at the end? This is just like that, except even more immediate. Scrolling on social media is already sensory (and content) overload. Cut to the chase or people will just scroll on to the next.

If Charlie Chaplin were just getting his start in 2016, he’d surely rise to the same great fame. Users like to watch videos on Facebook without sound making captions a necessity.

Look up “sweet spot” in the dictionary and the definition will be “60-second videos on Facebook” (ok, we’ve added that to our dictionary). Here’s the deal, anything over and you’ve lost the attention of your audience, anything under doesn’t stick and you haven’t grabbed them enough.

Good storytelling culminates with a call to action

This came up as the ultimate way to end a video, but a call to action at the end of any form of storytelling (from blog, to tweet, to video) is the perfect way to keep your audience engaged and moving on to your next great piece of content.

Don’t believe us? Top brand, Starbucks only posted 8x on Facebook in October! Avoid falling into the habit of “posting just to post,” and always post with purpose.

The most important takeaway of the week was this: Social is always changing, always growing, always becoming a better version of itself. What was true at SMW five years ago might no longer make sense today. As a brand, it’s important to stay up to date on the latest in social media and adapt as time chugs along. As always, the sun on social fun doesn’t have to set with Social Media Week, find more “behind the scenes” from Social Media Week Chicago in our Twitter Moment, and stay up to date on the latest social happenings by subscribing to our weekly social newsletter!

Ask the Expert: An Inside Look at Pitching Broadcast Media