The relationship between the emoji and the professional world is a tense one. There are some who would argue that the humble emoticon :-) has no place in a corporate setting, let alone its more animated successor, the emoji:

But social media has changed many minds when it comes to all things visual, and the emoji is starting to break through. Brands of all shapes and sizes, including B2B, are using them to not only communicate with followers but also to gain some serious media attention, and the uses are getting more and more common.

Chevy stepped up the emoji game last week when it issued a press release, written entirely in emoji. 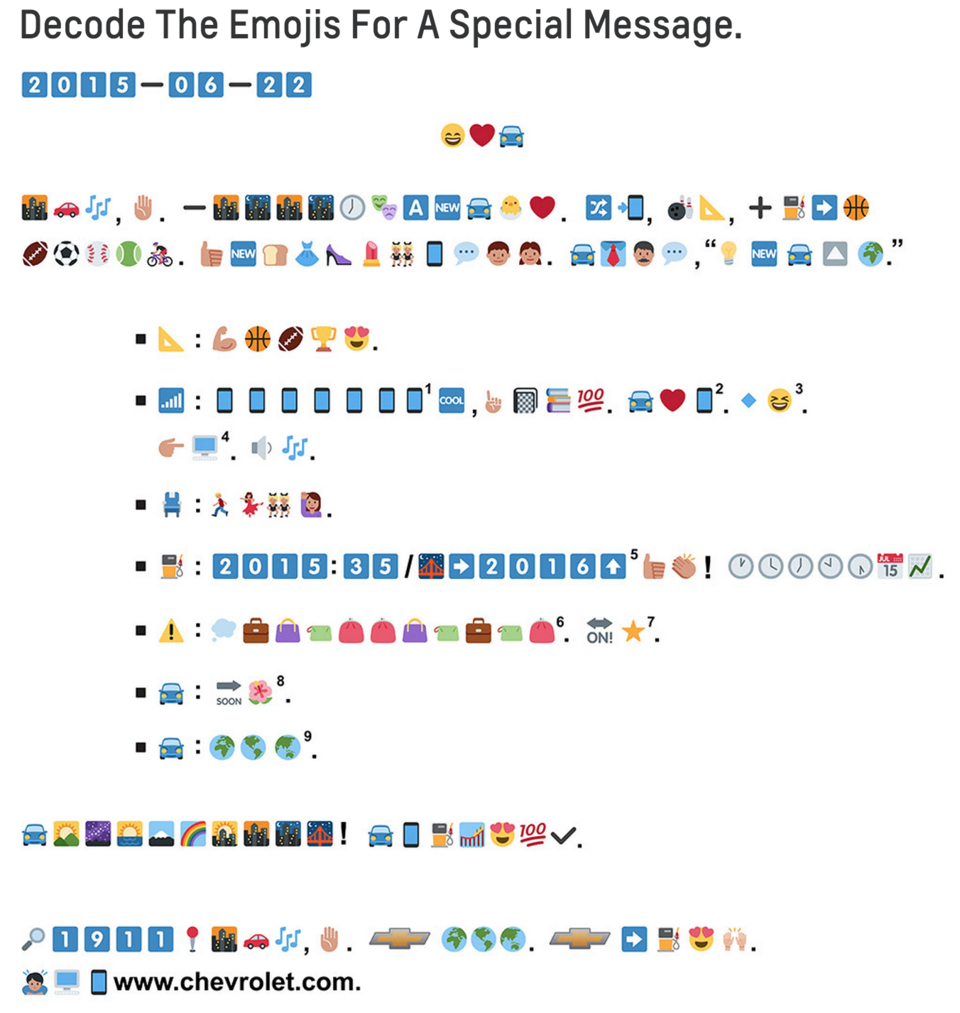 Their decision to create an emoji filled release seemed to be predicated on their need to market to millennials while also creating a stronger brand relationship between themselves and tech savvy car buyers.

The car company was quoted as saying words were not enough to describe its new car, the Cruze. So why not use emoji instead (wouldn’t be my first thought either but bear with me)? People were challenged to decode the message themselves before the actual contents of the release were announced. Sounds kind of crazy right? While it may be hard to decipher, it’s not completely off-base either. Emoji have become so commonplace that people will even send complete sentences to each other with just emoji, so it makes sense that Chevy would take a risk with their press release.

While the responses to the press release varied from complaints of it being too gimmicky to praise for their ability to generate free press, the marketing results overwhelmingly outweighed the cynical critics. A Linkedin contributor goes as far as to say that Chevy’s emoji filled press release is “pure genius.” The actual translation seemed to be less important (although interesting) than the actual media buzz and impact that the release had on their key audiences. Another article from Wired gave credit to Chevy for capitalizing on the growing trend of emoji in order to gain media attention.

This may seem like a rather far-fetched PR stunt, but Chevy is not alone. Emoji are becoming a go-to for target marketing. According to The Guardian, brands can better relate to their audiences by using these short, real and emotional images.

The Big Picture: How Brands are Using Emoji

For example, GE and Bud Light are incorporating emoji into their tweets as a fun way to convey a message and to engage with consumers. 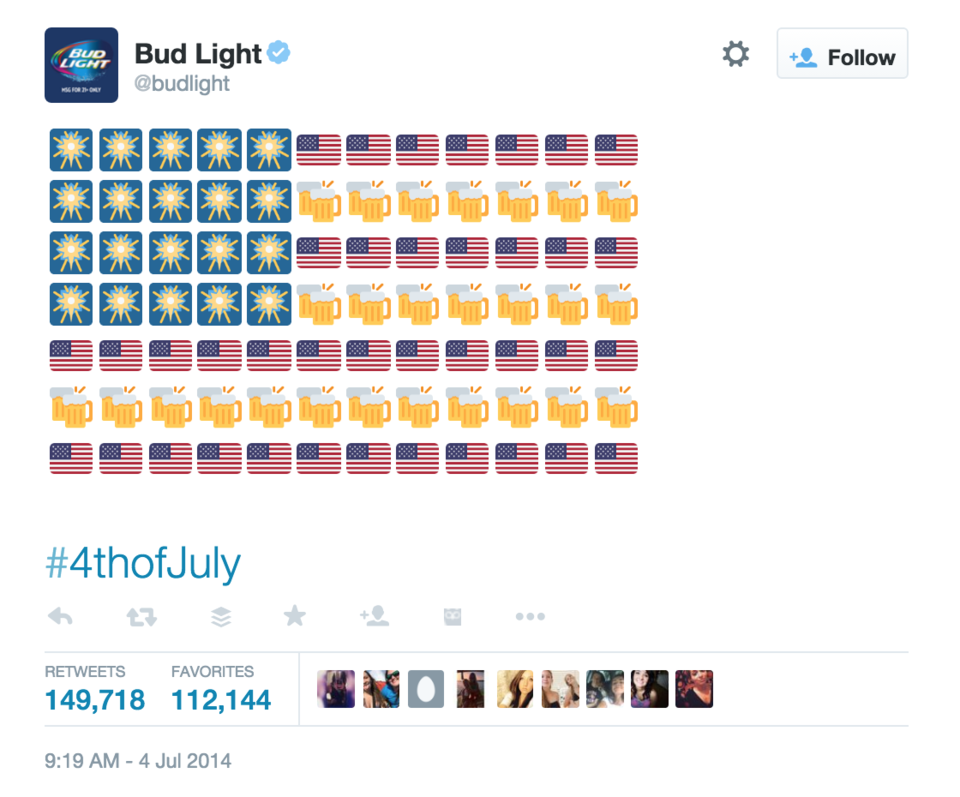 Those who participated in GE’s #EmojiScience received a science lab experiment video from Bill Nye in return for sending a snap of any emoji.

What's #EmojiScience? Send us a snap of any emoji you want to 'generalelectric' on Snapchat & see what happens! https://t.co/eY4N6tMmpi

Due to the success of this initial campaign, GE partnered with Mashable and Bill Nye (the Science Guy) to create a video series that explains things like evolution and climate change with emoji. The rationale behind using emoji science is to be able to teach kids about science in a relatable way.

Another way that brands are incorporating emoji is by creating ones specifically for their brand. Disney/Pixar is one of the brands that did this by making their own set of emoji available to users of the Facebook Messenger App with pictures of Nemo from Finding Nemo and Woody from Toy Story. Other brands like Coca-Cola and Ikea are also branding their own emoji to engage with their audiences in a new and unique way.

While you may be cautious to try something that seems “unprofessional” and silly, it’s important to know when it is the right time to incorporate emoji into your marketing strategy based on your content and target audiences.

The Guardian recommends you take these things into consideration:

Using emoji as a marketing strategy may work for some brands, but it is not for everyone. It is ultimately another opportunity for you as a brand to engage directly with your audience using something that they are already familiar with. If you do decide to make the emoji leap, have fun with it! Emoji can be the right tool to break through the social clutter, and connect with your target audience.

Want to learn more? Check out these other useful emoji resources:

Some Focus for Your Summer Reading: "The One Thing" by Gary Keller

Sixty Seconds for Social: Summertime and the Livin’ is Social