Getting Your Social to Sing: Lessons from the Grammy Awards 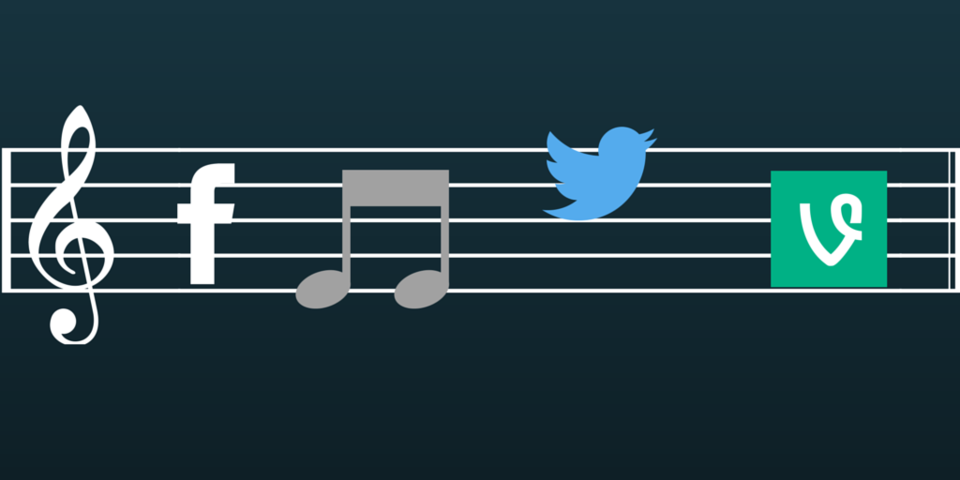 The top social moments on Facebook were Sam Smith winning Record of the Year; AC/DC opening the show; and Madonna's performance. 17 million people worldwide had 45 million Grammy interactions during the broadcast. In comparison, Twitter reported 20.9 million tweets globally, resulting in 1.6 billion views. The most-tweeted moment came from the Kanye West/Beck drama with Madonna and Sam Smith's fourth award of the night following right behind.

Although the broadcast's audience size was down (25.3 million viewers compared with 28.5 in 2014) social chatter reached a pitch that could shatter glass, as seen in this world map monitoring social mentions during the telecast: 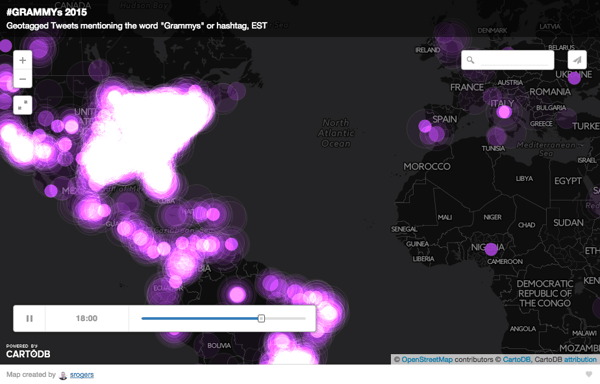 In fact, Nielsen Social ranked the 2015 Grammy Awards as the biggest social entertainment program of the 2014-2015 season so far. That meant a huge captive audience for brands to engage with on Sunday night. So how did they do? Here's a quick rundown of the brand social stars from Grammy night, and a few lessons learned:

Make Sure to Move It, Move It

GIFs, Vines, and video were dominating branded shares during the award show Sunday night, with brands (and media) like MasterCard, Sonos, and Mashable keeping things moving with visuals:

Follow us as we live tweet the #GRAMMYs. It’s going to be a night of #PricelessSurprises! #AlbumOfTheYear pic.twitter.com/XHghgj1OIO

One particularly active campaign came from Degree Women, which teamed up with the Grammys and actress Kat Graham for its #DanceBreak campaign. Every commercial break Degree posted a new video, and asked fans to share their own dance breaks on Twitter during each commercial break:

The Grammys even helped out with a post of its own:

Degree asked fans to share their own, and sure enough Degree's feed on Twitter is filled with videos of enthusiastic followers sharing their own dance breaks. This video success is a reminder that fans are not only looking for brands to share video, but are also looking for opportunities to share their own creations. Video is definitely on the rise, but don't let your film ambitions be a roadblock for the two-way relationship that social needs to be to be impactful. Ask your fans to share.

Don't be Confined by Your Genre

Some limits are there for a reason, some are merely self-imposed. That's true in music, and in social media. For example, you might think that only music and lifestyle brands would have something worth contributing to the Grammy conversation, but General Electric and its always experimental social didn't see things that way. Leading up to the Grammys, GE shared some quick, fun factoids on the history of the gramaphone:

In 2010, he received his own golden gramophone for the invention that changed recording forever. pic.twitter.com/LSGraDf5p3

This was in conjunction with GE's Snapchat promotion for Inventors Day, which handed its account over to Internet video star Jerome Jarre during the ceremony.The exercise on Twitter didn't yield significant engagement with their audience, (possibly because they did not include #GRAMMYs), and the actual results on Snapchat are unknown, but if GE's new focus on Snapchat is any indication, I'd say this was probably a strong move by this brand social star.

Another rule breaker on Sunday night was the previously mentioned Degree Women. Brands generally stick to one branded hashtag per award ceremony, there's no rule about it, it just focuses efforts. Degree Women didn't let that stop them from tying another hashtag--- #GameChanger---into its Grammy night social activity. That included conversations with followers and a few more GIFs of its own:

There was a risk here; Degree's strategy could have made its social shares seem scattered and come across as overdoing it, but it didn't. Degree made a smart call by putting most of its energy into #DanceBreak (pun intended), and continuing its #GameChanger conversation during the Grammys, brought a whole new audience to its everyday content.

Balanced experimentation in social media can pay off in different ways. It won't always be a sudden spike in followers, or engagements, as seen with GE's Grammy posts. Sometimes it's just learning something new about your followers, or the boundaries of your social influence. So, be smart about it with resources and content, but don't be afraid to step out of your comfort zone.

At the end of the day, you never know when a bored pop star is going to start tweeting at your brand during a nationally televised awards ceremony. I am of course referring to Iggy Azalea's epic rant against Papa John's while sitting at the Grammy Awards on Sunday. Because, if you're not winning anything, you might as well get something done. Azalea shared a series of exchanges she'd had with a franchise manager over one of his employees' sharing of her personal phone number: To its credit, Papa John's responded quickly:

@iggyazalea #We should have known better. Customer and employee privacy is important to us. Please don’t #bounce us!

But the real winner of this delivery drama was DiGiorno, who presented the perfect solution:

Hilton scored a similar social win with its quick reaction to Pharrell's (the brand darling that he is) bellhop outfit:

Who wore it best? Our bellhop or @Pharrell? #GRAMMYs pic.twitter.com/VetcsW6gsh

Real-time marketing is something we've covered at length, but it bears repeating: Keeping your ear to the ground on relevant social conversations allows for quick responses, so that you can avoid missing relevant opportunities. Be prepared for anything.

One last lesson for the road, when joining in on a hashtagged conversation like the #GRAMMYs, always (always!) check your spelling. A misspelled Grammy hashtag was used more than 100,000 times (including some brands and high profile accounts), but I hear the #GRAMMMYs buzz was #KILLLER.

With events like the Grammys, and the Super Bowl, and the upcoming Oscars, it's easy to get caught up in the excitement of the real-time and glamour of it all, but remember this: These skills and lessons aren't just for big television nights. They're for creating a strong foundation for everyday social. So, don't just pull them out for special occasions, make them a part of your process every day of the year.

What These 3 Brands Did to Make Us Love Them