Last year’s men’s World Cup in Brazil broke records on Facebook and Twitter, and had brands of all shapes and sizes clamoring for a piece of the conversation. This year it’s the women’s turn, and while the audience for the Women’s World Cup is smaller, this live event still offers plenty of social media lessons to be learned.

But first, let’s address the elephant in the room: FIFA.

The FIFA scandal has caused a major stir in the sports community and a lot of social media buzz. This includes some backlash against FIFA World Cup sponsorships , most notably comedian John Oliver’s plea to FIFA’s top brands to drop their sponsorship on the HBO comedy show, “Last Week Tonight.”

This begs the question: Does joining in on the social media soccer conversation this time around come with a prize or a penalty? There’s no certain answer, but now that some sort of resolution (for the time being) has been reached, it seems to be business as usual.

Last summer’s competition saw many brands abandoning traditional routes (like television spots) for hashtags. This year, the trend continues. The World Cup is a showcase for not only great soccer talent, but amazing uses of these trending conversations starters. In this post we’re getting off the bench and into the game to share some of the best uses of hashtags during the Women’s World Cup.

Let’s start with the basics. You may recall that Twitter got in on the games last year with its hashflags (hashtags that autogenerated flag emojis). This year, the hashflags are back with a Canadian flare, in honor of the Cup’s host country: 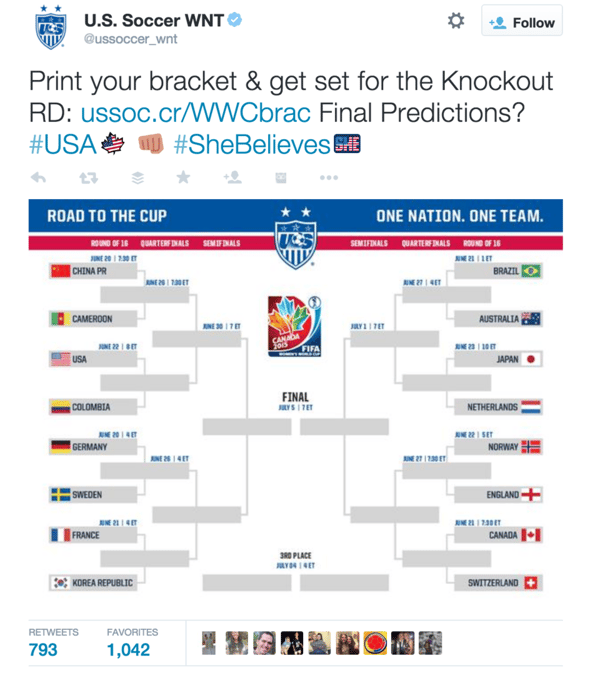 Festive add ons like this are more than fun, they’re a reminder to know your hashtags. This will not only make you and your brand look like you’re in the know, but will also get you in front of the largest possible audience.

Other important hashtags for the Women’s World Cup include #FIFAWWC and #WWC2015.

The USNT’s #OneNationOneTeam campaign is a lesson in patriotism. And the way brands are using the hashtag is a lesson in social media savvy. This hashtag began as a rally cry, highlighting the support of other U.S. teams (MLB, NHL, etc.). It has become a fantastic example of how to extend the reach of a hashtag. Keep in mind this hashtag was created for the 2014 World Cup. A year later and it’s still going strong, with some help from some well seeded influential shares.

This year, television network Fox has used it in its promotional shares, which also feature some of its biggest stars.

GMA has embraced the hashtag as well.

You don’t have to have Agent Scully on your payroll to implement this strategy. Take a closer look at your social media community. Who are the influencers in your circles, people who have a strong following, whom you can connect with? Teach them about your cause/hashtag/social media effort, and ask them to help spread the word.

It’s an unfortunate truth that the Women’s World Cup has a much smaller audience than the men’s (even though the ladies team has a more winning history). But that fact has become a real strength for some of the hashtags on a mission...and that mission is awareness. This year has seen a number of girl power campaigns, not only trying to build interest in soccer among a female audience, but aiming to inspire women (of all ages) to aspire and succeed in all areas of their lives.

The USWNT is doing this with #SheBelieves.

#USWNT forward @alexmorgan13 gets her first start of the @FIFAWWC #SheBelieves Read her bio: http://t.co/4TaYdUivXL pic.twitter.com/926cblVuoD

FIFA has a similar message with its #LiveYourGoals effort:

And Mondelez International (owner of Trident, Ritz, and Chips Ahoy) has had quite the success with #PassTheLove, and its message of being kind on social media (and in life):

Still smiling over @ussoccer_wnt's win last night! Watch them do it again this Friday ⚽ #PassTheLove #SheBelieveshttps://t.co/1fNrvEd6Dx

All of these are fantastic examples of considering the larger context when preparing for social media around an event. What started as campaigns targeting soccer fans have evolved into larger conversations, evidenced in part, by the wide range of brands and fans sharing content.

The #USWNT have won their group and made it to the final 16! Let's #passthelove and wish them luck! http://t.co/VYgtLMPRvn

It’s a reminder to think outside the box when looking for larger opportunities for conversations relevant to you and your brand.

Whatever your platform of choice, the power of the hashtag cannot be oversold, and the success of these World Cup efforts are a wonderful reminder. Whether it’s for the Women’s World Cup, or just your average Wednesday, using hashtags effectively is an important part of any social media strategy. They drive and define conversations, and they can make you look like a smart and relevant marketer. Let these hashtag insights guide your conversations through this World Cup and beyond.

Written with help from Jamie Mayer.

Finding the Write Stuff: “Everybody Writes” by Ann Handley

Sixty Seconds for Social: Medium Could Be Just the Right Fit