Ok, ok. I can understand that you might be leery of Amazon's bias. They sure were quick to jump on the #deflategate bandwagon.

In case you ever need to pump deflated footballs http://t.co/jf5ERUAUUf pic.twitter.com/XYyEI9LpXm

Forget Amazon for a moment. Let's take a look at some other Seattle-based brands and see how they're participating in this Seahawks frenzy. Everyone knows Boston is famous for tea parties and Seattle loves its coffee. Starbucks, an official partner of the Seahawks, calls the coffee-drinking fans the “Legion of Brew.” This interesting partnership delivered exclusive Seahawks content via the official Seahawks mobile app, when L.O.B.s were sipping lattes inside a Starbucks location. The baristas' shirts were pretty cool, too.

Here in Jet City, both Delta (the team's official air partner) and Seattle-based Alaska Airlines want to be known as the Seahawks' biggest supporters. Personally, I like the local guys. At Alaska Airlines, Russell Wilson is the carrier's Chief Football Officer. Anyone flying from Seattle wearing a #3 Hawks jersey gets to board their flight early. #GoHawks.

Speaking of travel, Expedia employees created an amazing 10-story shrine to Beast Mode completely out of construction paper displayed in the windows at HQ. 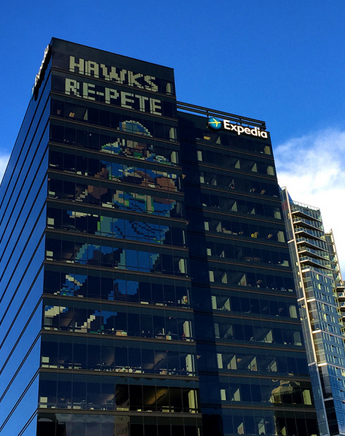 Around here, when a brand or businesses uses its building to pay tribute to the team, we call that #Hawkitechture. Go ahead. Scroll through the #Hawkitechture hashtag on Instagram. I'll wait here. It might take a while. There are just sooooo many.

When it comes to personal branding, we at Curator have to tip our hats to the #12Pets. Some of those guys really have an amazing content strategy. We can't decide who is more creative — @barkleysircharles and his 306K Instagram followers or @Meowshawn_Lynch and his 2,500 Twitter followers.

A post shared by SirCharlesBarkley the Frenchie (@barkleysircharles) on Jan 9, 2015 at 7:31am PST

You may have heard that recreational marijuana is legal here. We wondered if an industry so young would be ready to jump into the action. Sure enough! A hard-working marijuana dispensary is working round the clock to roll 12,000 joints in honor of the big game. This special Seahawks blend is marketed as the 12th Pack.

But don't worry. If that kind of green isn't your thing, area grocers can hook you up with some fan-friendly organic produce.

One final note from our local mythical creature brand, Sasquatch. He has made the most mesmerizing 12th Vine. Seriously. I challenge you to look away.

With that, we'll hand it over to you, Boston. We're waiting to be impressed by marketers' Patriot Pride.