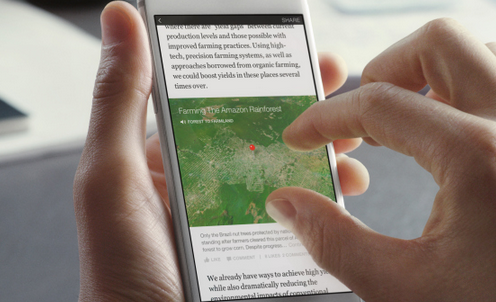 When it comes to daily headlines, social media has become a primary news source for many of us. Unfortunately the ease of scrolling and scanning has made it less likely we’ll tolerate the tediousness of clicking through to read an article in its entirety. Facebook is hoping to make that process easier by removing the extra step of clicking through to an article. Last month, rumors swirled about a partnership with The New York Times and other top publishers making it clear this move was likely, and now it’s official.

Instant Articles bring complete (and original to Facebook) articles directly to your News Feed. With publishers getting about 60% of their traffic through Facebook referrals (according to The Wall Street Journal), it’s no surprise that Facebook has been trying to remove the middleman from this process.

What exactly are Instant Articles, and what does this new Facebook content mean for brands on Facebook? We’ve got the latest news you need to know.

News of this latest launch appeared on Facebook’s blog last Wednesday, and painted a much clearer picture of the previously announced intentions to publish complete, original multimedia pieces from top publishers. Facebook’s launch partners include The New York Times, BuzzFeed, NBC News, and The Atlantic, just to name a few. It’s still early days, and many, including launch partners The New York Times and The Guardian have been quick to label this partnership as an “experiment.”

The program is kicking off with a few articles, and will build its content from there. Articles are formatted specifically for Facebook and shared through the Instant Articles page on Facebook. To see Instant Articles in your News Feed, you’ll have to Like this page. To get the full multi-media experience, access Facebook via your mobile device. Links to Instant Articles accessed via desktop will send you to a version of the article on the publisher’s site, like this one by National Geographic:

The Instant Article version is cooler, trust me. Articles include multimedia, interactive elements like the ability to zoom in on photos, tilt your phone to explore them further, auto-play videos, listen to audio captions, play with interactive maps, and Like and comment on individual parts of a story.

Instant Articles have been promoted as a win-win for both users and publishers, offering publishers ad revenue and a new, very visual platform on which to share stories, while readers have access to a faster, more enjoyable way to find great content.

In addition to providing a new and different content experience for users, Facebook has also sped up the process by which readers can access this content. Because users aren’t leaving the Facebook app (a definite win for Facebook), Instant Articles load up to 10 times faster than the traditional shared article on Facebook, which has to open via a separate browser. There can be no doubt that Facebook hopes the convenience of this format will attract more users to its mobile app.

Facebook has said its algorithm won’t favor Instant Articles over other content, but the latest algorithm update did make one change that should help this content out: the previous algorithm prevented you from seeing multiple posts from the same source in a row. With the update, if a user is enjoying certain content, it will be more likely they will continue to see it. Given the buzz it’s been receiving, Instant Articles will likely get a lot of attention.

Most likely due to the incredible amount of design that goes into these articles, there are no commitments for any publisher to push out a certain amount of Instant Articles, and publishers can end their partnership with the social media site at any time. Facebook is allowing publishers to use its own publishing tools. Stories are then automatically converted into a format that fits the Facebook app.

Another Instant Articles perk for publishers is the performance data on their stories, courtesy of Google Analytics and Adobe’s Omniture. As for the most surprising perk of them all, publishers can control the look of stories presented on Facebook.

While Facebook has the approval of some publishers, many others are wary about becoming even more closely intertwined with Facebook. It makes sense that publishers would want to keep the experience of their users in their hands, especially in regards to access to data about their readers. We will have to wait and see to determine which additional publications will give in to the promise of revenue, and which will want to guard their coveted experience with their readers.

As Facebook and other sources like Snapchat, with its Discover platform, change the way news is being delivered, marketing strategies must likewise shift. Since formatting news directly for Facebook will impact how it’s written, it is crucial to keep these new formats in mind while pitching a story.

Want to learn more? Check out these other great resources on Facebook’s Instant Articles:

Awards Matter, But Not Why You Think