Being in the know couldn’t possibly be any more critical in the world of social media, and thanks to the release of Mary Meeker’s 2016 annual Internet Trends Report on Wednesday, that’s exactly where we’ll stay.

Meeker, a tech industry expert and partner at the prominent venture capital firm Kleiner Perkins Caufield & Byers, has once again imparted her Internet insights to an eagerly awaiting audience in her “state-of-the-Internet” address.

Since the lengthy 213-slide report covers a lot of ground (check out the full report here), we’ve highlighted the most relevant social-specific insights for your perusal.

Disclaimer: Not everything you read below may shock you, but trust us, this stuff is “Know Or Die” in the world of social.

Trend: First and foremost, global internet usage has increased 9% to 42% penetration of the world population, or 3 billion global users. This shouldn’t come as a surprise to anyone, and neither should the continued strong upward trend of global smartphone usage, up 21% from last year.

Why it matters: The continued growth in both of these categories proves that the Internet isn’t going away and puts even greater importance on understanding and utilizing the mobile landscape to the absolute best of a businesses’ abilities.

Trend: Photos, graphics and images—oh my! Their use (and popularity) on social has continued to soar. 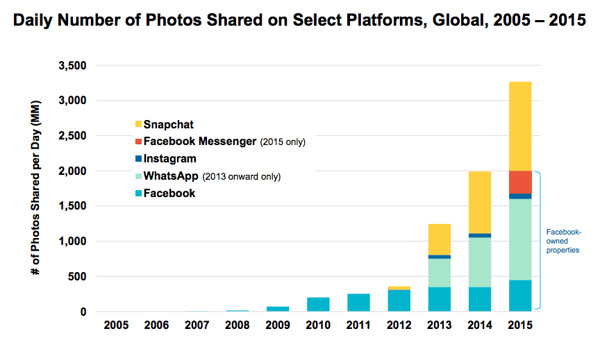 Why it matters: It’s important to note the incredibly dramatic rise in engagement when a photo or image is included in a social post of any kind, but it’s more than just an increase in photo sharing. What’s happening is a complete mindshift to a more visual way of communicating. It’s generational, and it’s happening quickly.

Meeker also highlighted the potential for monetization due to the increase in visuals, specifically Pinterest’s efforts to utilize image-search in shopping on its site.

Trend: Snapchat is growing and isn’t showing any signs of slowing down. In fact, as of June 2nd, Snapchat has officially overtaken Twitter in number of daily users.

Why it matters: Snapchat has become a breeding ground for branded content. From Discover stories to promotional filters, the popular app has developed from a personal communication tool to something much more complex. Who would have thought that creating a filter that turns your head into a taco would become a marketing tool driving millions of engagements? When used strategically, Snapchat can be more effective than brands ever imagined.

Trend: Snapchat isn’t the only platform that’s headed in a visual direction—Facebook has joined in on the fun, too. The pair leads the social media video pack, both rapidly trending upwards on video views. 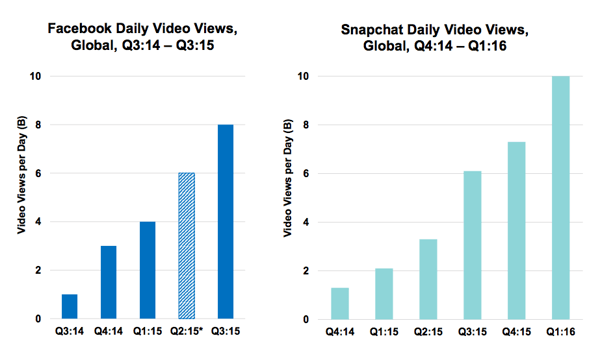 Why it matters: Video falls into the same category as images in terms of the level of increased engagement. Based on this trend, we think it’s safe to say that if you’re going for video, push it on these two social media masters. Meeker specifically pointed out the effectiveness of Snapchat video for its “3V” standard; videos are perfect on this platform because they are Vertical (made for mobile use, which is trending as aforementioned), Video (an ideal means of storytelling), and Viewing them is always optimized for full screen.

Trend: We want it and we want it NOW! The strong and increasing presence of livestreaming should not go unnoticed.

Why it matters: Timeliness and authenticity are only two of the many reasons livestreaming is beginning to take off. Recent examples include Facebook’s ‘Live,’ and the new partnership between  the NFL and Twitter to livestream Thursday Night Football. The incredible evolution of video, particularly the recent shift from semi-live video to real-live video, was brought home through Meeker’s great video timeline: 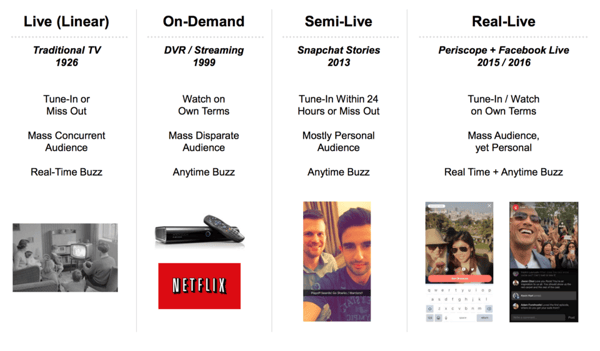 Even Chewbacca Mom got a shout-out from Meeker, pointing to her as a proof point of the importance and potential of livestreaming to marketers. 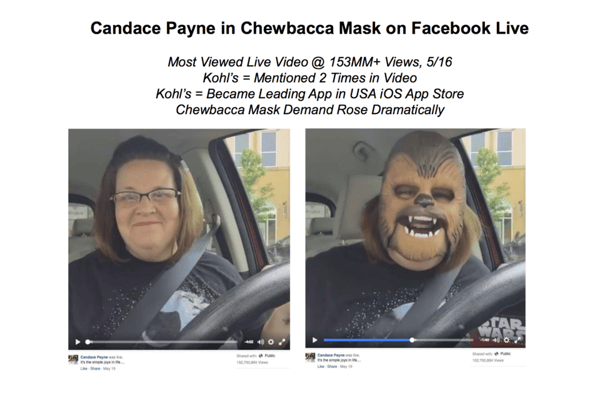 Utilizing livestreaming can be a quick and easy way to show and tell to an active audience. A word of caution, though: LIVE is the operative word here, so this is probably not the time to just wing it. Make sure your livestream is entertaining and to the point to keep your audience engaged and interested.

Trend: Toto, we’re not on AIM anymore. Messaging has drastically evolved; Meeker even referred to messaging apps as something that has become a second home screen.

Why it matters: It sometimes seems like there’s a new form of messaging breaking on to the scene every day. Meeker says that messaging has moved from “simple social conversations to more expressive communication.” However, Bitmojis and Snapchat lenses aren’t the only development. Meeker also notes the emerging business application. Programs like Line and WeChat are creating commerce channels within apps that were initially messaging-oriented. Communication is the driving force of the social media industry and won’t be going out of style anytime soon, so checking out one of the many options available is definitely worth your while.

Videos and images (aka rich media) are clearly the stars of this year’s notable trends. While not every visual will be a viral homerun like Chewbacca mom, the impact they’ve made on the social and marketing world as a whole can’t be ignored. If this news doesn’t excite you, it should. In a world where showing brand personality is becoming more and more important, this couldn’t be a more on-point trend.

We’ve got a full year before Meeker’s next report, and although no one knows which new trends will have appeared by then, we can’t wait to see what innovators have up their sleeves—or in their livestreams—in the meantime.

Want to learn more? Check out these other great resources:

Brands as Publishers: Does Your Organization Have a Publisher’s Mindset?

Speeches that Make the Grade: Elements of an Effective Speech