Sixty Seconds for Social: Medium Could Be Just the Right Fit

The content gods spoke long ago on the subject of corporate blogs, and the message is clear: Blogging is not just a pastime for avid writers, it’s a critical tool in branding a company, sharing a company’s vision and creating content that will put that brand on the map.

Having said that, blogging (and writing in general) is not everyone’s cup of tea (although as Ann Handley would say, “Everybody Writes”...get on that). So it can come down to finding the right tool for your company’s writing style and resources. The first and most highly recommended approach, especially for corporate blogs, is for the company to maintain it as an owned asset by including the blog as part of its website. However, what’s a brand to do if it doesn’t have a steady stream of writers or followers, or isn’t ready to commit the proper investment (both time and money) to build and feed a blog? There are other options.

Blogger, Wordpress, and Tumblr (to name a few), all offer very different approaches to blogging beyond the corporate website. What all of these tools have in common is incredible customization, which can be a good and a bad thing. The ability to control each and every font, color, and image can be great, but for the begrudging blogger, it can be yet another distraction on the road to actually putting pen to paper (or more accurately, hands to keyboard). If you crave a platform that focuses on the content (that is, the words themselves), without the distraction of too much design functionality and customization, than Medium—a social blogging tool from the same minds that brought you Twitter—might be your best option.

In this Sixty for Social, we take a look at the pros and cons of Medium as a blogging platform, and revel in its simple (yet useful) glory:

According to Fast Company, the design of Medium is its “secret weapon” and, indeed, it has received rave reviews from the tech, media and design communities alike. Its goal is clearly to create a welcoming space for writers to simply write and enjoy their creative experience without the distracting bells and whistles other social platforms often include.

When Medium started in 2012, it was positioned as a long-form content site, most likely to separate itself from other micro blogging options. But as it gained momentum, it also gained competition and started to restructure its features to appeal to a broader audience. In just recent months, Medium has added a short form feature similar to that of Twitter to reach a more mainstream audience, but unlike Twitter, Medium doesn’t require character limits. Medium said in a blog post, “We know that length is not a measure of thoughtfulness.” Medium is constantly experimenting with how it works -- so as long as online blogging evolves, so will Medium.

What really sets Medium apart are its collaborative features. After you write a draft of your post, you’re able to share it with other people to get edits, comments, and feedback via email. Anyone who provides feedback and edits will get credit in your post once it's published, which gives them incentive to participate.

The collaboration doesn't end when you hit publish. Readers can comment on an article. But rather than have these comments appear at the end of the post, they'll be placed in the margins of the story where they're the most relevant. This commentary can be kept private or made public, it's up to you. The mission behind this core function is to give writers the chance to build off of other people and ideas.

Another collaborative feature Medium offers is Channels. Channels are groups of blogs/authors around a certain industry or subject matter. It’s another great way to find and share relevant content on Medium with an engaged audience.

A good example of a Channel on Medium is one made for Snapchat. Two digital marketing specialists created a blog with current news, ideas and strategies revolving around Snapchat with numerous contributors from all over the world. 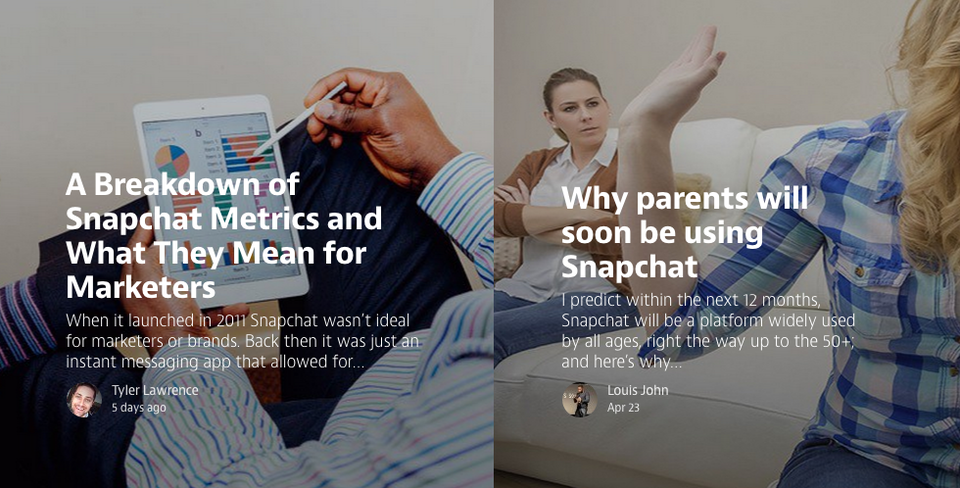 Getting Started on Medium

One way that Medium separates itself from other blogging platforms, is by commissioning professional writers to contribute so that a wide range of topics are represented, It also helps keep it free from some of the junk that tends to circulate internet forums. But according to The New York Times, 95% of the posts each day still come from non-professionals. Medium made a conscious decision recently to change its format because they found some users were too intimidated by the professional writers and brands using the platform.

You might be surprised to know that the White House, GE, Marriott, BMW, and Starbucks all use Medium. Not only are these recognizable brands, they are brands that have a track record for being very successful on social media.

The White House has 75,000 followers on Medium and employs writers ranging from NASA astronauts and scientists to Tom Hanks, all writing about important and relevant issues affecting people around the world. 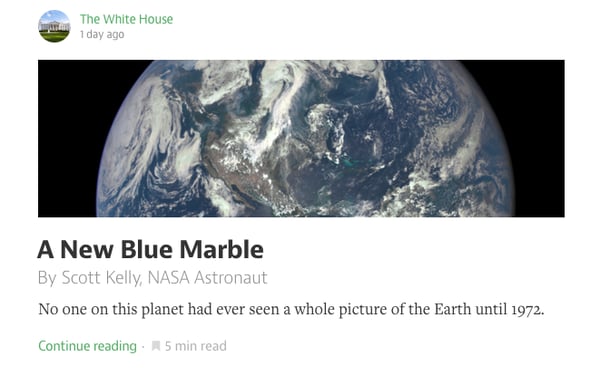 GE’s 7,200 followers read articles that focus on the power of innovation and invention and how those things can help to change the world.

Starbucks has 45,000 followers on Medium, and not only posts articles about coffee but also builds thought leadership through shares about social issues. 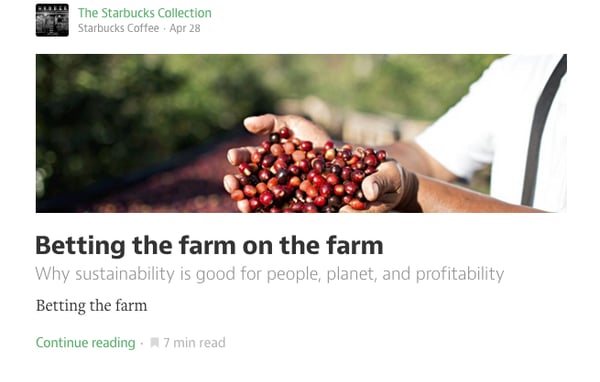 Brands themselves are not the only ones taking advantage of Medium. CEOs like Elon Musk of Tesla, Dennis Crowley of Foursquare and Blake Ross of Firefox have written articles for the blog to promote thought leadership around big ideas related to their companies.

When you first get to Medium’s website, you must create an account before you can search or view other people’s writing. It will ask you to sign in with your Twitter account or through Facebook or Gmail. Once you are signed up, you will notice that writing on Medium is almost as simple as sending an email or posting a tweet. Simply click on “write a story” in the top right hand corner and start to write. The only tutorial you are forced to sit through is the one at the bottom of your screen and it doesn’t even deter you from writing; it’s actually helpful. 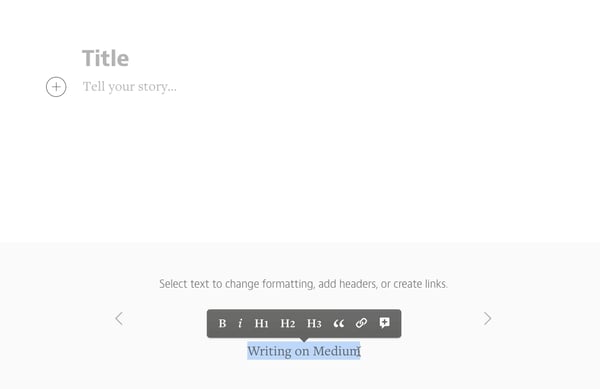 Getting Started on Medium

Before hitting “publish,” make sure to add pictures/videos, tags to enhance SEO (just like any other blog, but a lot EASIER) and any notes that may be helpful to readers, such as questions or thoughts on the subject matter.

Just as variety is the spice of life, it’s also a useful ingredient in a content strategy. The trick is making sure your company mixes in the right variety of tools.

Medium is one piece of the content and blogging puzzle that brands are using to reach a segment of their target audience. It offers a simple, clutter-free way to get started today, but there’s more to consider when choosing a blogging platform than just ease-of-use. Stay tuned for part 2, where we’ll discuss when (and when not) to employ Medium.

For a weekly dose of helpful social tools and headlines, subscribe to our Sixty for Social Newsletter: Subscribe

Want to learn more? Check out these other useful resources:

Sixty Seconds for Social: Medium and the Borrowed Content Dilemma