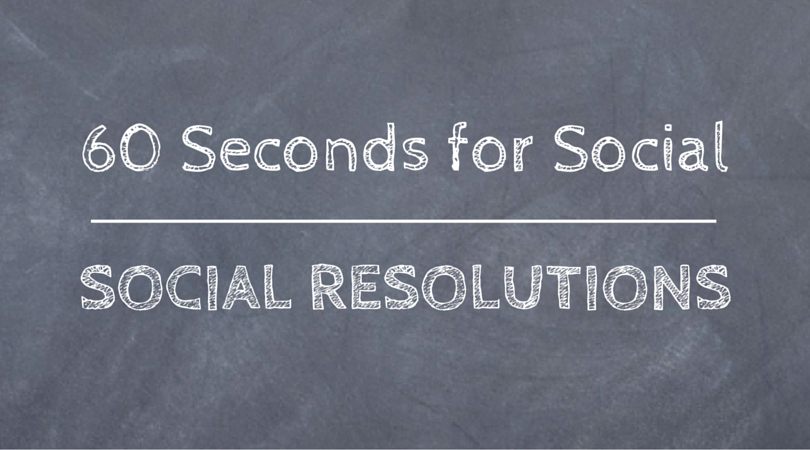 With a new year comes the sense of a fresh start with a new outlook on life, as well as the unavoidable temptation to make resolutions. With the accompanying slew of articles predicting the hottest trends of 2016 in everything from fashion to finance, why leave social marketing out of the mix? Here are a few resolutions to give you the upper hand with your 2016 marketing initiatives.

We’ve sifted through each and every list (OK, most of them) of what’s going to take social media marketing by storm in the next 12 months. So, without further ado, here are the social media trends you should keep an eye on (and a hand in) for 2016.

Get Moving with More Mobile

Last September, comScore published a study that found American spend the majority of their time consuming digital media within mobile apps. We’re spending 62% of our digital media time on mobile devices. So, as we enter 2016, it’s safe to say that the use of mobile devices has overtaken desktop usage. To put that growth and migration into social perspective, 1.4 billion out of 1.5 billion Facebook users regularly access the site via their mobile device. If you’re not yet convinced, take a look at Google. Last year, for the first time ever, Google’s search volume on mobile exceeded desktop.

Looking into 2016, it’s crucial that social media marketing campaigns and programs are adjusted, adapted, and accessible through mobile devices. To act on this thinking, it’s important to understand how your target audiences are discovering and accessing content. Tools like Google Analytics help pull out statistics that can provide insight into how users are interacting with a brand — i.e. where and how they are connecting. It’s also critical that any brand or product website be mobile-friendly.

Get Personal with Private Messaging Apps

The Facebook Messenger app, which was revamped near the end of 2015 with key features specifically for business use, offers perhaps the best example of this. On vacation? Use the message thread to create a personalized “away message” that lets followers know you’re out, easing the pain of a slow response time. Private messaging will also store a history of the customer’s interactions with your business page to give you the whole picture when responding. With the influx of users on mobile apps and the tools made available for page owners, mobile messaging apps will see an increase in their use for customer interaction. So be ready to get up close and personal with your social media audience.

Get Visual with Video and Livestreaming

We’ve said it before but it bears repeating: It’s time to step up the visuals. That means all visuals, but especially video (seriously). That’s exceptionally true of livestreaming. Periscope solidified its title as the app of 2015, and don’t expect it to go away in 2016. As everyone tries to jump on the livestreaming train, including Facebook, users can expect livestreaming apps to become more mainstream throughout 2016.

This week’s Consumer Electronics Show (CES) in Las Vegas has already brought us a plethora of livestreaming in action with Mashable broadcasting via Facebook Live as well as Snapchat and Periscope, and CES has been broadcasting via Snapchat all week as well.

The ability on Facebook and Periscope to save videos after the livestream stops, erases former time restraints and opens the door to opportunities like video podcasting and bringing remote audiences to real-time conferences and events.

Another graphic tool on the rise in 2016? Visual search. This new feature allows search engines to scan for specific parts of images, similar to facial recognition. Pinterest has already employed this feature, allowing users to search within images across all pins, and don’t be surprised if Google introduces a similar feature in the near future.

Get Specific with More Detailed Metrics

The good ‘ol days of social media designated “likes” as an effective way to measure reach. Those were simpler times. Nowadays, a page is lucky if a small fraction of its total audience sees its Facebook post, decreasing the accuracy of “likes” as a metric system. While these “old-fashioned” indicators shouldn’t be dismissed altogether, more specific metrics like click-through rates and other forms of engagement are growing in importance.

Improvements in in-platform analytics are already diving deeper. For example, Facebook's Conversion Lift metrics do just that with Facebook ads, aiming to show businesses exactly how social efforts contribute to the end results. Twitter has also implemented a similar system, using both on and off platform data to provide a more accurate overview of campaign results, allowing marketers to paint a more complete picture of the value of social media efforts.

Now for the fun part, in 2016 social media users can look forward to the growth of emoji analytics! The influence of emojis is undeniable, and as an online way to convey emotional reactions, there’s no doubt sites will take advantage of them. In 2016, expect the widespread rollout of Facebook’s emoji-esque “Reactions” feature that allow users to further engage and react to posts. If the emoji trend can help us better understand our audience, we’re certain there’s a great year ahead.

Get Strategic with Paid Social

If you fall into the anti-pay-for-traffic category, it's time to face some difficult truths lest you find yourself left behind. 2016 is predicted to be a year when more social networks start charging for traffic. It’s a difficult but necessary truth, and we must work to overcome the belief that social media is a free tool. It’s an affordable and effective tool when used strategically, but it does come with a cost, and that will become even more true in the coming months.

Facebook has been at the forefront of this trend, with continual algorithm changes that make it much more challenging to attain any real reach on Facebook without the aid of promoted posts. Brands will have to start relying on advertising as a way to broaden visibility of content. And don’t be shocked if you see any algorithm changes from Twitter. Stemming from its need to monetize, many see an algorithm introduction on Twitter as a good long-term solution for building its audience. The addition of an algorithm would potentially mean a tailored experience for each user with branded content. Whether long-time users would appreciate this Facebook-like move is another story. If (and more likely when) this comes to pass, organic reach on Twitter will almost certainly drop, meaning options for boosting visibility will arise with a pricetag attached.

Get Louder with Employee Advocacy

When looking for a boost on social media, you need look no further than your own backyard (or conference room). Last year saw an increase in in-house cheerleaders by way of social advocacy. Services like Addvocate, LinkedIn, SocialChorus, and Hootsuite’s Amplify aim to delete the “please retweet/like/share” emails from your inbox once and for all by pushing your company’s internal team to share company content. Employee advocacy is a simple and effective way for your biggest advocates to spread the word. Encourage employee participation online in 2016 and ultimately get a greater reach for your brand.

We’re only a week into 2016 and already we’re seeing incredible changes for social. With livestreaming shining at CES and rumors of character expansion at Twitter, it’s clear there’s plenty of change ahead.

As 2016 progresses, we’ll be following the exciting path social is taking, which means keeping an open mind to impending changes. There’s no time like the start of a new year for a brand to sharpen the tools in its social toolbox, and get business building fresh momentum..

Need help keeping up? Start your social year off right and keep it up the whole year through with a little help from our weekly newsletter. Subscribe today: Sixty Seconds for Social Newsletter

Written with help from Bianca Lev.

The Ghosts of PR Past, Present, and Future