Sixty Seconds for Social: Summertime and the Livin’ is Social 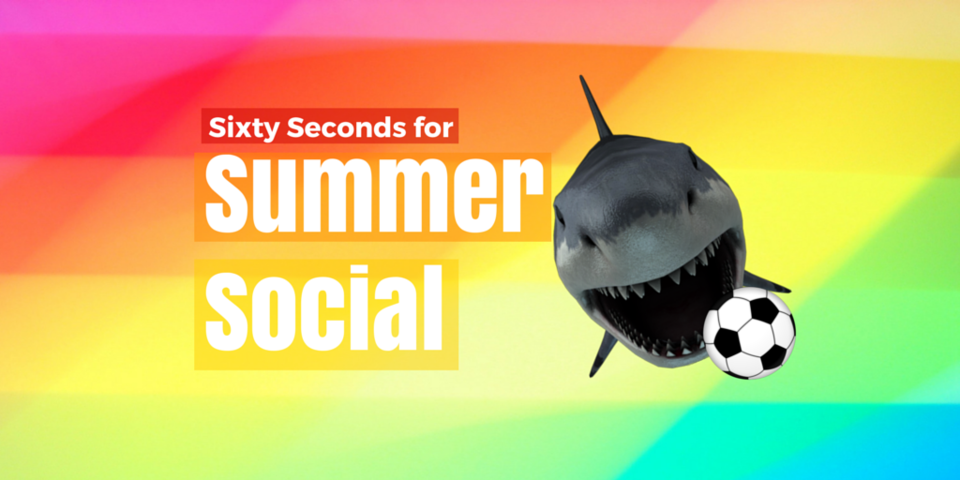 This summer has already provided plenty of social opportunities for brands, who like us, often take on a more playful spirit in the summer. We’re only a few weeks in, and many are already making a run for the social moment of the summer.

So, what’s hot on social this summer? In today’s post we’re taking an early look at the top social moments of Summer 2015...so far...

It’s going to be hard to beat this as the top moment on social media this summer. From the moment that the SCOTUS decision on marriage equality reached the crowds, the social support took off like a media intern running with a historic decision from the Supreme Court.

Today, this intern runs the world.

The reaction was swift and it was supportive, with hashtags like #MarriageEquality and #LoveIsLove making frequent appearance, that is, until one eclipsed them all—#LoveWins.

At its peak, 35,000 tweets were sent per minute using #LoveWins.

Update: There have now been over 10 million Tweets about the Supreme Court's #MarriageEquality ruling. #LoveWins http://t.co/KvCAtPwyy8

It’s not clear who was the first, but the hashtag took off not long after President Obama sent out this Tweet:

Today is a big step in our march toward equality. Gay and lesbian couples now have the right to marry, just like anyone else. #LoveWins

Where brands are concerned, politically charged topics like decisions made by SCOTUS, can be a gray area, but there wasn’t much gray to be found among the flurry of rainbows from brands of all shapes and sizes.

How #MarriageEquality became a reality in the United States! #LoveWinshttps://t.co/CV5jYBttnA

Everyone deserves to be welcomed, valued, respected & heard. Today's SCOTUS ruling is a win for equality. #LoveWins

It goes without saying that before joining in on a moment like this, consider your audience and whether your contribution will mean a positive impact, but being able to participate in historic conversations like this, is really what social media is all about. This was an opportunity for brands to express their values and show they are more than a business but a collection of people all part of the human race, and for most, it was an strong internal and external communications success.

#NoMaybes at the World Cup

The US Women took home the top prize at the FIFA World Cup in impressive fashion, but Nike walked away with a notable victory on social media. Nike, a brand that was not an official sponsor of the World Cup, although they are a sponsor of the USWNT, received more engagement around its World Cup posts than FIFA sponsor Adidas. Nike’s #NoMaybes content garnered 121% more relevant social activity than Adidas’ #BeTheDifference campaign. Nike’s video shares in conjunction with the hashtag sparked much of the conversation, while Adidas’ campaign fell flat, having been used as a general soccer hashtag for past events as well. The original effort made by Nike here, paid off generating incredible enthusiasm from the World Cup audience.

It takes more than one star to bring home your third. #NoMaybes #uswnt http://t.co/1SLmONMNRUhttps://t.co/lOsWAZQvlx

The conversations around the World Cup on social are a great example of how hashtags can drive a conversation online. According to marketing firm Amobee Brand Intelligence, 2.8 million Tweets were posted about the World Cup during the 6 hours following the start of the final match on Sunday. The hashtag #USA was included in 1.08 million of those. It’s a brilliant lesson in the power of the live event to drive online conversations and the importance of knowing the relevant conversations and hashtags.

Meerkat Takes a Bite Out of Shark Week

This past March, real-time marketing got even more real-time as livestreaming apps, Meerkat and Twitter’s Periscope battled it out, as the hot tool of the moment. Many speculated that Meerkat (the underdog) would soon succumb to the Twitter’s challenge.

Fast forward to Shark Week, the Discovery Channel’s annual homage to these widely misunderstood creatures, and Meerkat’s swimming with the big fish. Discovery has partnered with Meerkat, to take advantage of the livestreaming app’s new embed feature and give fans bonus livestreamed footage online.

It’s a great way to build additional interest around this insanely popular week of programming, and a fantastic example of how to use Meerkat’s embed feature.

Your brand may not be hosting the 27th year of Shark Week, but you can still keep your social above water this summer with livestreaming. We’ve got lots of great tips on getting started with livestreaming (whether your preference is Meerkat or Periscope) in this recent blog post.

Summer is fleeting, but well-planned pieces of summer social media marketing will be a topic of conversation long after school’s back in session. Make the most of this season, and be warmed by the glow of your social success for months to come.

Want to learn more? Check out these other useful resources:

Finding the Write Stuff: “Everybody Writes” by Ann Handley