We’ve said it before and now we’re going to say it again: the Internet loves a good multiple choice. The ongoing success and popularity of polls and online quizzes has made that clear, and at this point, if you haven’t used them in your marketing, you’re running out of excuses. Twitter’s now made it even easier, with the introduction of polls to its site and app.

Prior to the update, avid pollers were forced to either link to an external poll or ask followers to Favorite for option A and RT for option B (not the most user-friendly, scientific or accurate method).

Well, those days are over. Now, polls are embedded directly into Tweets, making it a much more useful tool for eliciting a direct response from followers.

We've got polls now! Which typeface do you prefer?

Here’s a closer look at Twitter Polls and effective practices to get the most out of the new feature.

Before you start asking your own polling questions, let’s address some basic getting started questions:

Twitter Polls are accessible both on the desktop; just tap the poll icon to get started:

At the moment, Twitter Polls only offer users two choices for responses… Cats or Dogs. Yes or No. To be or Not to be. Simply type your question into the body of the tweet and provide your two answers, and click the Tweet button. Then, you’re good to go. The poll will be embedded directly into the tweet:

Have you seen people create fun & meaningless Twitter polls because "internet?" - Will be useful for market research

Polls are "live" for 24 hours. This means anyone can vote/retweet/or share a poll until that 24 hour limit is up. The poll owner and voters alike are informed of how much time is left to vote and how many people have voted so far. Once the 24 hours are up, the tweet will remain on the page, however, no new votes are accepted. At the poll’s expiration, those who voted are notified to return and view the results, which are public.

At this time, the stats available on polls are fairly limited, reporting only the number of votes a poll receives. The good news is Twitter is working on making demographic information available soon. So stay tuned on that front.

Whether you're acting as the voter or as the mastermind behind the poll, it is important to consider the voter side of every poll. For instance, what a poll will look like to a user as they are scrolling through their feed.

When voters click to vote in the poll, they will see the results as they currently stand. Their selection will be marked by a checkmark that is only visible to them.

After voting, they'll also be able to see the total vote count and the time remaining on the poll. 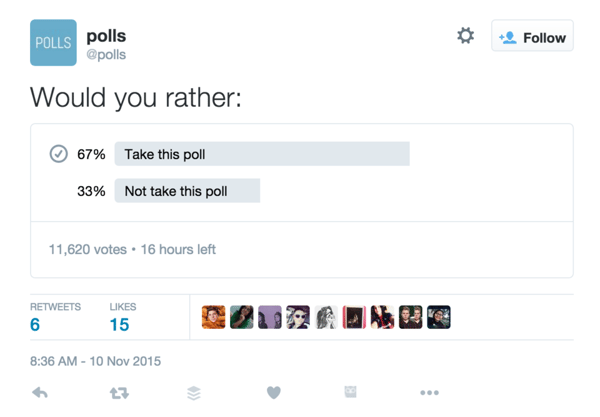 Once a poll’s time is up, anyone who voted will receive a push notification to view the results. Voting is anonymous (no one can see what a voter selected), which is not ideal for metric loving marketers, but will likely keep users from being deterred from voting at the risk of being spammed over something they might appear to "endorse."

A built-in social tool that helps marketers gauge audience reaction  in real-time is the stuff of social marketers’ dreams. And, using polls to give followers the chance to help shape content strategy by providing feedback with one click should not be understated. Asking followers for their opinions gives them the sense that the brand values what they have to say— as of course it should!

Here are some best practices and examples of how to start using polls today:

Dell recently took Polls for a spin and posed a question asking what weight job seekers place on a company’s social media presence. The feedback they received from their poll could be a critical factor when it comes to their own social and HR strategies.

We're curious: Does a company's social media presence influence your decision to join them? #TwitterPolls

Nissan had some fun with their first poll and asked their followers where they would take Nissan’s GT-R sports car for a day, letting their fans picture themselves behind the driver’s seat for a moment (and then maybe going out to buy a car!).  At the very least, the product was on their minds.

Nissan Fan Poll: If you had a #Nissan #GTR for a day, how would you spend it?

Engage in a Live Event:

Some tweeters took the recent GOP Debate as a prime opportunity  to launch a poll and get some feedback from followers during the debate. This live interaction is something that can be used by brands to engage with their following while at any event. Bonus points to Ora Politics for finding their own way around the 2-option limit!

Twitter Poll: Of the three #gopdebate which did you appreciate/value the most? Vote below OR reply with CNBC

For most brands, Twitter Polls is a no-brainer. It’s a win-win. You have a simple interface that allows you to ask very direct, relevant questions. While at this point the metrics attached to that polling are limited, there is still plenty of value to be had. So keep an eye out for ways polls can engage your Twitter followers and start asking your questions!