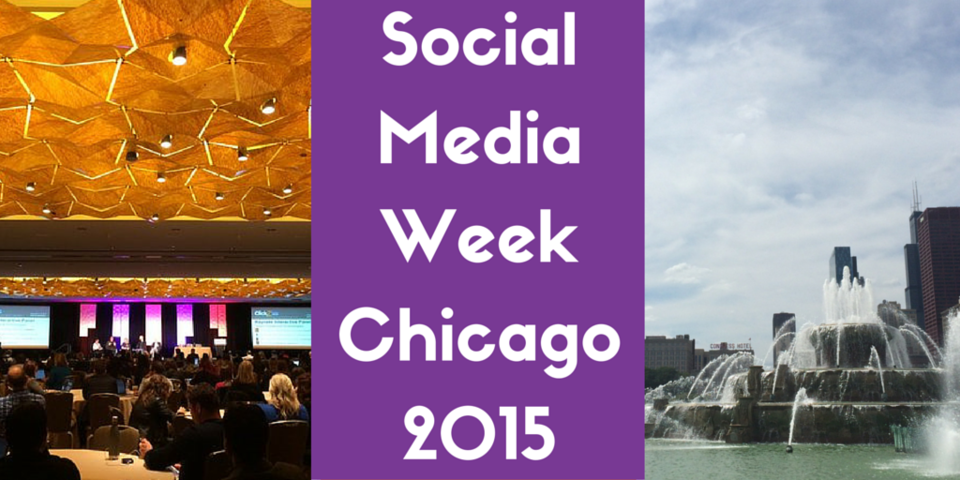 As promised in last week's post, we have lots more to share from Social Media Week Chicago. This go-round, we’ll delve into the trend that extends the reach of social media offline and into the real world (#IRL).

You don’t have to be a social media marketer to know that the struggle to balance the productivity benefits of mobile devices with our human need for a respite from the screen could not be more real. As Chicago’s own Ferris Bueller put it:

“Life moves pretty fast. If you don’t stop and look around

once in awhile, you could miss it.”

While it’s often difficult to imagine a future where we are less electronically connected and more in tune with the physical world around us, we learned at Social Media Week that scenario might not be so far off. Thanks to real-world brand experiences that leverage simple technologies and the Physical Web, we might even get there with our smartphones in hand.

During Social Media Week Chicago, we were first introduced to the topic of online meets offline at a presentation hosted by Cramer-Krasselt called, “Using Social Data to Create Real-World Experiences.” The concept is this: Social media no longer has to be something that leaves us stuck behind a screen. Rather, the up and coming trend for social media marketers is finding ways to converge the digital and physical worlds in order to carry brand experiences throughout the consumer’s day to day life.

The concept itself is a great one and actually fairly simple to employ, all you need is the digital aspect (social media) and some kind of physical world tie in. To illustrate the point,the presenter had the audience observe how a sign would light up when users hashtagged “#ads” or “#friends” on Twitter.

Bringing social data into the physical world- this sign lights up in real time for tags #friends & #ads! @SMWChicago pic.twitter.com/mqHzv4dk29

The light up board prototype was created using a small electrical kit from the hardware store, connecting apps with sites like IFTTT and Zapier, and custom software that they were able to easily develop themselves. The result was a range of triggers that can be programed to set off an action, in this case, the light would turn on when specific hashtags were used on Twitter.

This effect was a powerful one, allowing those in attendance to connect the dots and see the physical results of tweeting. You could feel a tangible sense of excitement in the audience over the cause and effect aspect.

The promise of this approach pushes us to think beyond the traditional screen experiences and into physical or in-person brand experiences. What can your brand do to connect the digital world to the physical world? Social data can help point you in the right direction. Observe where your conversations are taking place and what is at their core. In this case, the presenter used data from Twitter to discern which hashtags had been the most dominant in recent months to create a worthwhile experience. The bottom line? Put your social listening to work, use it as inspiration, and let it guide your brand experiences.

At another event, we heard from Jason Parker, SVP Strategy Director of Innovation at Leo Burnett who brought us up to speed on the Physical Web, an interaction and demand based way to unleash the full potential of the web. Parker explained that, while apps are the thing right now, not everyone is going to have an app for every single task. So technology is turning to web browsers, suggesting that apps really aren’t the future and URLs are. URLs can send and receive “Beacons” (as he called them) to any “smart” object and allow for an interaction that doesn’t involve downloading an app first. As the phone’s browser communicates with the broadcasts from nearby objects, Beacon style URLs will be readily available on your screen.

Imagine walking up to a “smart” vending machine that is able to send and receive Beacons from your browser. When you select the Beacon for the machine, you’re able to see a treat menu and select the candy bar you want. The idea is that you would be able to immediately walk up to something, anything, and have an interaction with it without the hassle of an app. You can see this interaction here:

The Physical Web unleashes a whole new level of potential for the web that some might not even know existed: On demand interaction that put the world quite literally at your fingertips.

If we had to single out the most remarkable take-away from Social Media Week, it’s the innovation around social media’s physical applications. Although, we shouldn’t be surprised. It feels like a logical and natural evolution to want to bring these two aspects of our worlds together, expanding our “social” interactions beyond the smartphone. As social media marketers, often found typing away behind our smartphones, we’re all for any trend that brings us back face to face.

The Ghosts of PR Past, Present, and Future