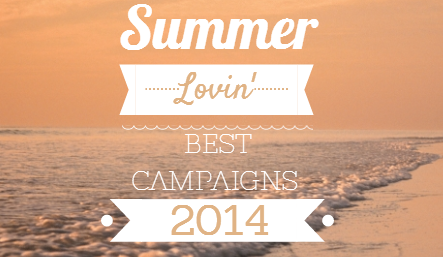 As we touched on in our blog post last month on "Marketing Lessons Learned from the Ice Bucket Challenge," there is a time and place for everything. And summer is an ideal time for brands to embrace the spirit of the season and build relationships with consumers in fresh, fun, and unexpected ways. Before the summer begins to fade too far from our minds, I wanted to recognize and document some of the summer's brightest campaigns and what we can learn from all of them.

I love Diet Coke, but my soda-free kids take great delight in shaming my caffeinated beverage of choice. However, this summer, something different happened: suddenly Coke and my beloved Diet Coke became cool. In fact, whenever we were in a grocery or convenience store, I often found them digging through the Cokes and Diet Cokes in the refrigerator section, screaming when they found one with either their name or a friend's, and then jumping on Instagram or Snapchat to share their find. All of this excitement was over Coca-Cola's Share a Coke Campaign.

In case you somehow missed it, from June to September, Coke swapped out its logos on 20 oz Coke and Diet Coke bottles with 250 of the most popular names among teens and Millennials encouraging consumers to share a Coke with a friend named on the bottle. Generic labels like "BFF," "Star," "Bestie," "Legend," "Grillmaster," "Buddy," and "Wingman" were also featured just in case you couldn't find the name you were looking for.

This clever marketing move suddenly made the common practice of buying a Coke more fun, personal and conversational. Even if you are not a Coke fan, it's hard to walk by a bottle with your name on it. Consumers playfully shared their stories on social media using the #ShareaCoke hashtag. Coke extended the concept with a 500-stop, cross-country "Share a Coke" tour featuring traveling kiosks that let fans customize a Coca-Cola mini can for themselves and a second one for someone special. Fans could also visit www.shareacoke.com to personalize virtual bottles and share them with friends via Facebook, Tumblr, Twitter, and Instagram.

While it's still too early to determine how this campaign impacted sales, it's a safe bet to call it a victory for increasing Coke's share of voice this summer and reaching/creating a whole new group of Coke fans.

The Always #LikeAGirl Campaign – Creating a Movement through Storytelling

This summer's World Cup called out the inner athlete in all of us. Perhaps that is why feminine hygiene brand Always' #LikeAGirl campaign seemed to strike such a chord. Always has been devoted to puberty education for the past 30 years, but this summer, it kicked it up a notch. Armed with discouraging research that half of girls report a drop in confidence after their first period, Always wanted to create a movement to empower young females and attack what Always calls a "the self-esteem crisis" among young women.

Inspiring storytelling was at the heart of its strategy. Always hired award-winning documentary filmmaker Lauren Greenfield, who directed the 2012 documentary, Queen of Versailles, to create a video that would redefine the phrase "like a girl," transforming it from an insult into something strong and inspiring.

The #LikeAGirl video was posted on YouTube on June 26th and went viral immediately. It resonated with mothers, daughters, and girls of all ages (as well as fathers and brothers). It was a viral sensation with more than 47 million views and will make you think twice about using the phase "like a girl" in a negative way ever again.

Few things are as quintessentially summer as a good ice cream cone. This universal truth was the motivation behind Ben & Jerry's clever pop up campaign this summer. Ben & Jerry's took to the road, to give ice cream lovers the inside scoop on its new Cores ice cream, featuring a core center of fudge, caramel or real raspberry jam.

Ben & Jerry's Cores Tour trucks hit the streets visiting 12 cities through the summer, pulling up to local community events, businesses and nonprofits, and dishing out free ice cream. While the company would promote its arrival into each city, it kept its day-to-day schedule a bit of a mystery. Fans could follow the @BenJerrysTruck to keep tabs on its location and send tweets using the hashtag #CoreTour to encourage it to stop by a nearby location. For some lucky tweeters, it would even make door to door deliveries.

The concept was simple, but well executed and kept Ben & Jerry top of mind socially and on the streets throughout the U.S, this summer.

The Bear Naked team went beyond granola to cook up an unexpected marketing stunt – a giant urban slip and slide - to keep its brand "cool" during the hot summer months. On June 21st, the longest day of the year, they transformed a steep city street in San Francisco into a giant block-long slip and slide for "Urban Surfing." To pull the stunt off and give it a strong social reach with Bare Naked's target audience, they partnered with YouTube sensation, Devin Supertramp, whose adventure video channel has a following of more than 2 million. Devin sent out an invitation to his followers inviting the first 100 people that responded to join him and Team Supertramp for the experience. The fun and unexpected nature of this stunt made this video impossible not to watch, and garnered more than 2.6 million views.

As a marketer you might also enjoy the behind the scenes video:

Labor Day is now in our rear view mirror, but we all know it won't be long before it's time to roll up our sleeves and begin planning for summer 2015. Be sure to take a moment to think about your favorite summer 2014 marketing campaigns and make a mental note of what made them so irresistible. What other campaigns would you add to our 2014 Best of Summer Marketing Campaign List? Tell us below!

Challenging the status quo. I love stepping back and analyzing a PR program to determine if there’s a better way to move our clients closer to their goals. I'm constantly scouting out innovative new approaches, tools and technology – anything that holds the potential to really deliver. And, when I discover one with merit, there's nothing more rewarding than getting up to speed, putting it into action and generating big results – that, to me, is hitting it out of the park!

What I Learned on My Summer Vacation: How to Present with Power & Presence