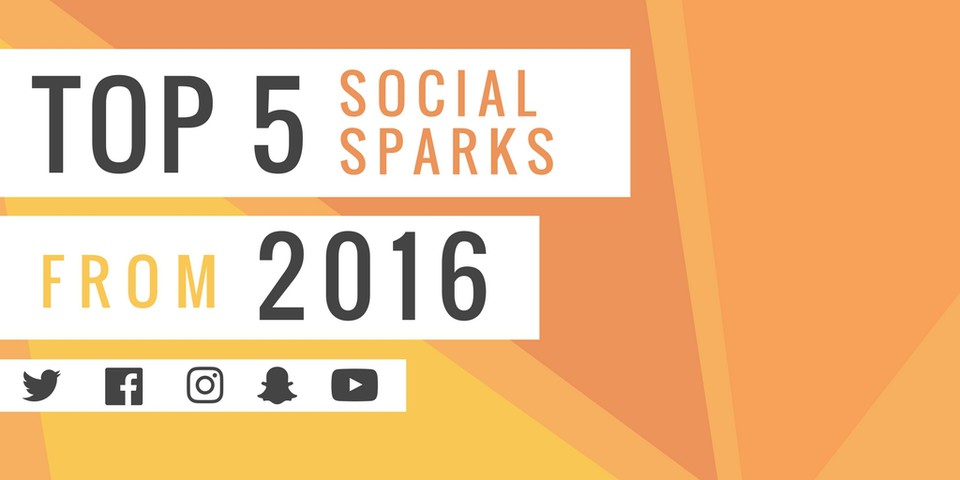 As our New Year’s Resolutions kick off (or slowly fade away, if we’re being honest), one mantra remains true for marketers: New Year, New Content. If you’re struggling for some inspiration for your 2017 social media marketing campaigns, here are our top 5 social sparks - our nickname for pieces of social content we find clever, interesting, and draw inspiration from - from 2016 that left their mark:

Apple, a brand notorious for its groundbreaking (and often lengthy) keynotes, took the social world by surprise with this short, sweet and silly recap video. The video’s speed and sense of humor strayed a bit from Apple’s typical voice, but the simplicity and style kept inside the brand’s wheelhouse.

Takeaway Tip: Try applying this recap technique for your brand’s product launch or event experience. A quick recap update is perfect for sharing on social and will update your audience without boring them.

The Salvation Army put a solemn spin on holiday cheer with a brilliant 360 photo campaign on Facebook. The photos feature a seemingly typical family holiday card, but when the viewer scrolls around the photo, a tattered room reveals itself. When completely rotated, viewers will see the impactful tagline: “Poverty isn’t always easy to see. Especially during the holidays.” This creative use of 360 photos is one social media won’t soon forget.

Takeaway Tip: Any panorama photo can be converted into a 360 photo on Facebook, so don’t stress if you don’t have the budget for the fancy camera.

Honorable 360 Mentions: New York Times once again left us in awe with its The Daily 360 video series, and we gave Hamilton’s promotional version a standing ovation While these are harder to replicate without special equipment, they are definitely worth a look to inspire your 360 degree efforts!

This past fall, University of Wisconsin Green Bay brought college acceptances into the 21st century. The college sent out Snapchats to future attendees to notify them of their acceptances, and the response was overwhelmingly positive. Their reasoning for the method? Wanting to reach their applicants (18 year olds) where they knew they were (Snapchat) - an important lesson for marketers regardless of topic or subject matter.

Takeaway Tip: Hosting a contest of any kind? Alert your winners via Snapchat! This also serves as a great tactic for getting people to add you on the platform, so it’s a win-win all around. 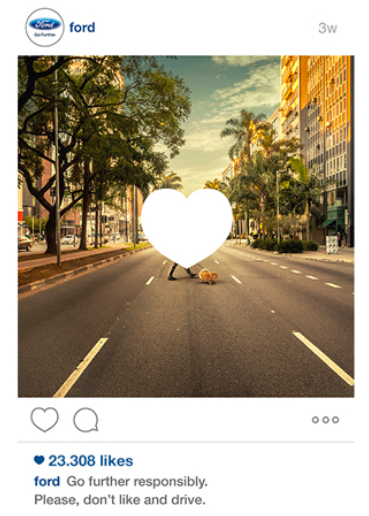 Ford’s driver safety campaign masterfully blends medium and subject with this Instagram campaign. The brand posted a series of images representing the view while driving a car, but with a twist. Each image shows a person crossing the street, but is almost entirely blocked out by the Instagram heart that appears when you double tap to ‘Like’ a photo. Paired with the tagline, “Don’t Like and Drive,” this campaign perfectly represents the dangers of scrolling through social media while driving and resonated deeply with its audience.

Takeaway Tip: Using social media for an important PSA can be powerful when done correctly. For maximum impact, keep the cause relevant to your brand.

So sorry about your screen @SrhHdlw. Someone else hates spiders too. 😀 pic.twitter.com/inmNacutWl

Motorola showed its comedic and creative side with personalized videos to go with its #ShatteredStories campaign on Twitter. The hashtag prompted followers to share how their phones were shattered, and a lucky few got personalized videos from emojis that “escaped” from cracked phone screens to offer advice. This perfectly executed two-part campaign is a prime example of encouraging engagement successfully.

Takeaway Tip: Getting your audience to use your hashtags can be difficult. Try offering something to those who Tweet using it, an easy way to increase your hashtag’s reach!

Although the New Year inevitably brings new content, the ghosts of social posts past can be excellent sources of inspiration. Let’s resolve to fill 2017 with captivating social content to make us laugh, cry, and hit that ‘Like’ button.

To get more of our favorite social sparks straight to your inbox, subscribe to our weekly B2B social media newsletter:

Internal Branding: The Secret To Nailing Your Corporate Brand Strategy