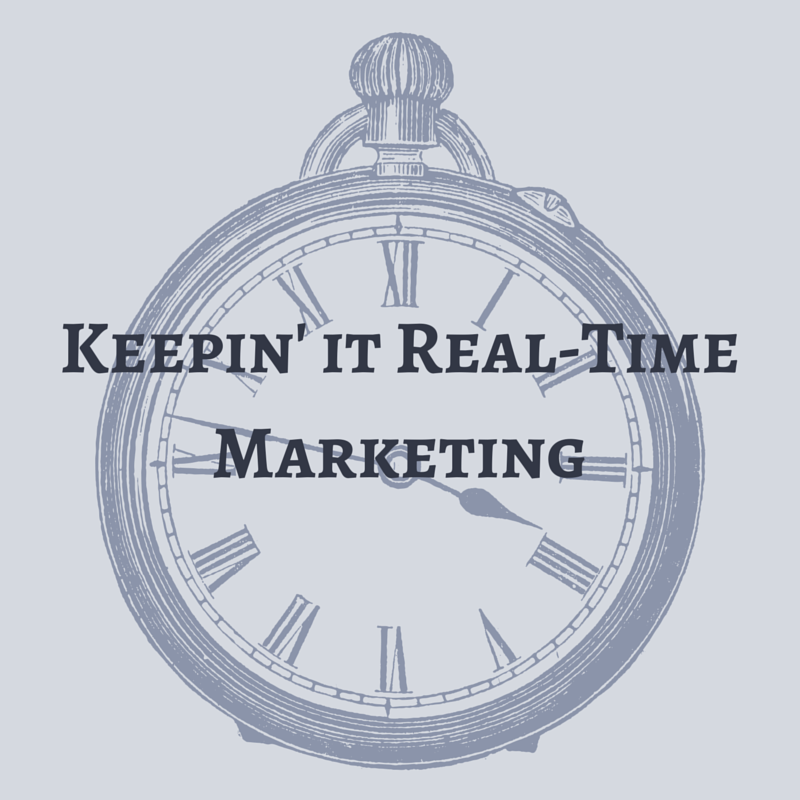 The Golden Globes are behind us, the Super Bowl, Oscars, and Grammy's lie in the near future, and that means one thing to marketers, we are in the middle of prime Real-Time Marketing Season!

While the east coast shovels out from winter storm Juno (aka #Blizzardof2015), we've all been served a blustery reminder of the careful balancing act that real-time marketing can be. Although most of the blizzard posts were clever, brands were skating on thin ice by instantly tweeting around #Blizzardof2015; not knowing the ultimate outcome of the storm.

Now that the unexpected blizzard and the resulting real-time efforts are behind us, it's time to focus on the steady stream of live televised events coming up in the weeks ahead. The Super Bowl, Oscars, and Grammy Awards will provide brands with some of the biggest opportunities of the year to truly shine on social, or otherwise fall face down in any remaining snowdrifts. Here are four tenets to keep in mind as you and your brand embark on your real-time marketing endeavors:

If there was a book of bedtime stories for modern marketers, page one would feature this piece of real-time marketing history from Oreo:

Power out? No problem. pic.twitter.com/dnQ7pOgC

Of course, the true story is not so much a fairy tale, as it is a story of planning and preparedness. So much of this campaign's impact was due to the absolute perfect timing of the post, which was of course, just moments after the Superdome plunged into darkness during the third quarter of Super Bowl XLVII. Timing is everything, and perfect timing requires a whole lot of planning.

But not all real-time opportunities have such predetermined times and dates. For instance, the infamous #BendGate surrounding claims that the iPhone 6 was extra flexible, was a news story that presented a sudden opportunity in which many brands exploited, including this perfect example from Kit Kat:

Make sure you have a system in place to make simple real-time efforts like this, just that----simple. Of course, brands like Oreo and KitKat have teams of social/design specialists and real-time war rooms at their disposal, making preparedness an expensive but simple task. So, what about the rest of us? Have a plan:

Real-time marketing can be a lot of fun, but don't lose sight of your business goals. Whether it's increasing sales, driving traffic, or building awareness in the right circles, make sure your real-time marketing efforts are in service of that goal. For example, The birth of the royal baby brought out all kinds of branded congratulations. Some, like this one from Oreo were relevant, adorable, and on point:

While others, like this one from Charmin, left consumers a little off color:

Get the throne ready! There's a new cub in the Royal family. #RoyalBaby pic.twitter.com/zXQMm7LHkl

I'll give Charmin props for the effort, but I'm not sure this post inspired many purchases of toilet paper.

Know your audience, and take your cues from them. Don't force your way into a conversation that doesn't suit your brand.

As mentioned earlier, plenty of brands were jumping in on the #Blizzardof2015 conversation this week, some nailed it. Crest was not one of those brands:

aw man # changed to #blizzardof2015 RT Nothing to do during #Snowmageddon2015 ? Just brush your teeth with #Crest!

No one wants to be “that guy.” Don't force your way into a conversation, but be ready to join those relevant ones, like Nintendo was during the 2013 Oscars.

And now, a special message from Bowser... #Oscars pic.twitter.com/aY9jdIVFLL

As with all posts, be sensitive to your audience and think before you post, the Internet is littered with examples of ill-advised attempts by brands to chime in on current events. National tragedies and natural disasters are no place for brands. Unless you have something of value to contribute to the conversation, a respectful silence is usually the best policy.

Are you ready? We've still got several huge live television events ahead of us this winter. Keep these four pillars of real-time marketing in mind, and who knows...your Oreo moment could be just around the corner.

Want to Learn More? Check out these other great resources