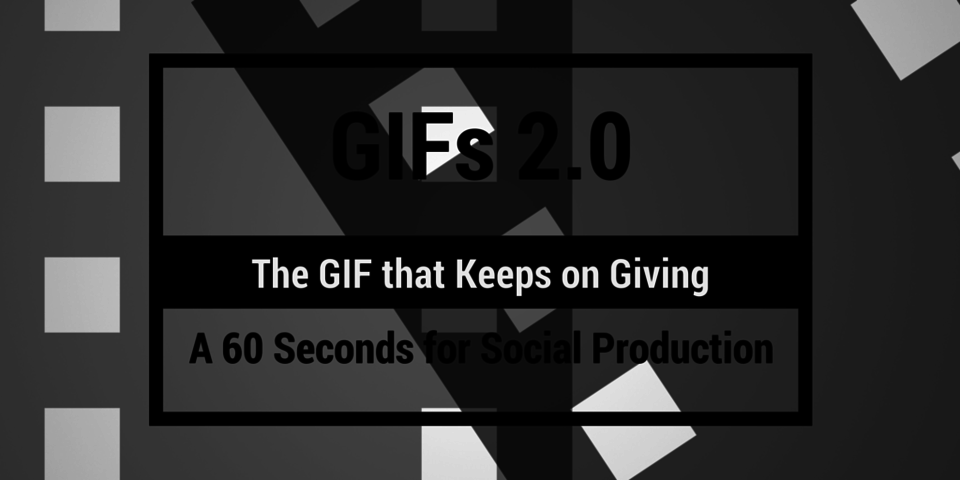 This Sunday, many of us will tune into the Oscars to see the best films of the year honored for their greatness. It’s a wonderful reminder of the universal pull of the visual. But filmmakers aren’t the only ones receiving praise for moving pictures this year. Animated GIFs are hitting the big time, and brands are getting on board.

We’ve shared tips on animated GIFs before, but the conversation on GIFs is far from over. Brands are doing new exciting things with these easy-to-consume, and easier-to-create than you might think, animated visual shares, and now is the time to join in. Here is your guide to getting started with Oscar-worthy GIFs:

A Refresher on the Basics

Before we get into the nitty gritty, I have to get a couple of definitions off my chest:

To clarify, a GIF can be a meme, but a meme is not always a GIF. The words are not interchangeable.

There was a time, when creating a good-looking GIF meant having a degree in photoshop and digital design. Now, it seems that everyday, a new and exciting tool pops up to make GIF-making easier, which really means one thing: There’s no excuse anymore. In the same way anyone with a smartphone can now be a cinematographer, literally anyone can download these free tools and start experimenting with GIFs. Here are our favorites of the moment:

These are just a few of the latest GIF making offerings, check out our previous blog on GIFs for more great tools to fit your GIF needs.

Making the Most of GIFs

So, now that you’ve got a GIF or two, what do you do with them? The better question is: What can’t you do with your GIFs? Here are a few ideas for making the most of your new visual content:

At this point it’s clear that the power of the visual can not be oversold. But just to make sure you get the point, consider this stat from BuzzSumo: Posts that include images on Facebook and Twitter are more than twice as likely to be shared. It pays to be visual, and GIFs are the next thing in visual. What kind of success are brands already having with GIFs? Lots of it. Here are just a few example of brands that are using GIFs to spread content, build awareness, and make the most of this visual storytelling tool:

Perhaps the most far-reaching and quality example of branded GIFs, is Google’s Doodles, which commemorate the historical or current happenings of the day. Sometimes it’s a well-known event, like MLK Day, the World Cup, or the Lunar New Year:

Then sometimes you learn something new, like on Alessandro Volta’s (inventor of the first electrical battery) 270th birthday:

Everyone loves a good quote, and IBM took it to a new level with this GIF quote highlighting one of its own in a very visual way:

This exceptional GIF-ographic (it’ll catch on, just watch) by Salesforce, is another example of how GIFs can liven up a tired set of data points:

Tumblr is not only a great place to find GIFs, Tumblr itself is great at using them. Most new features on the site are paired with a simple GIF to introduce the new feature, like this one showing users how to use the new embed function:

No list of social goodness of any kind would be complete without General Electric, which is at the forefront of GIFs as well as all things social. Its Throwback Thursday shares of stock GE footage are mesmerizing and educational:

Don’t you feel inspired! The only limit to what you and your brand can do with GIFs is your own imagination.

Getting Your Social to Sing: Lessons from the Grammy Awards